The  Canadian Action Party stands for the use of the Bank of Canada as an independent entity that would be responsible for regulating and sustaining our Canadian economy.  Please, read our historical overview to better understand the key role that a central and national bank can play in developing the economy of Canada.

The Formation of The Bank of Canada

Initially, the Bank of Canada fulfilled its mandate. First, our bank was of great assistance in getting Canada out of the Great Depression.  In later years, we financed the war efforts through the Bank of Canada.  Our bank was also responsible for building infrastructure and social systems in Canada into the early 1970s. However, in this time period, world-wide financial policies began to change in response to international political strategies.

Secondly (2), central banks regulated the chartered banks by raising what we call the statutory reserve requirement. This is the percentage of deposits made with the banks by the public that the banks had to redeposit with the Bank of Canada to back their chequing and other short-term accounts.  Such redeposits had earned the banks no interest, but, again, here we see another central banking procedure that encouraged the chartered banks to not only be accountable, but also to work within the resources which they had available.

A Loss for Canada

Canadians worked within this declining system until the early 1990s, when the longevity of the Bank of Canada came under attack.  In mid-1991,  without debate or press release, parliament quietly adopted a bill that  phased out the statutory reserves over a two-year period (subsection 457 of Chapter 46 of the Statutes of Canada.) This bill  left higher interest rates the only means of “fighting inflation”.  Read on to discover the ramifications of the loss of our central bank as a regulator of our economy…

Interest rates, however happen to be the revenue of money – lenders as the sole way of fighting price rise, or inflation.   What a conflict of interest!  What a way to drain Canadian resources into the cache of the few. ( see – the social lien section).

At the same time, a campaign was launched to enshrine the independence of the central bank from the government.  Essentially this campaign decreased the ability of the Bank of Canada to enact any regulatory functions.  Though the Bank of Canada Act sets forth that all shares are owned by the federal government, that in the event of a disagreement on broad policy between the governor of the Bank of Canada and the Minister of Finance, the latter shall have the right, after thirty days written notice to conform, to dismiss the Governor. If that does not add up to the good old capitalistic definition of ownership, i.e. non-independence, what does?

As well as removing the Bank of Canada’s ability to act as an independent agent, the Federal government proclaimed that “zero inflation,” a perfectly flat price level, was essential for our economy. Most of Canada’s federal debt was run up in the attempt to enforce these provisions, which contradicted the Bank of Canada’s charter to finance our country’s debt.  Such contradictions, however, did not deter Mr. Crow, and subsequent Bank of Canada Governors, from pursuing like policies to this day!  What can they do?  They are merely following orders. 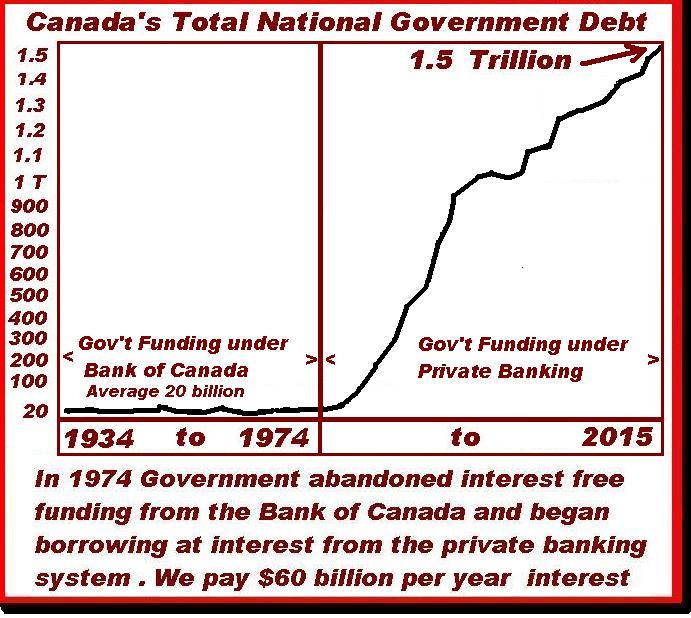 As we keep this historical picture in mind, it is important that we now consider two unbelievable facts. They are so astonishing that most people simply won’t believe them!! Indeed, they really do defy the imagination!

Unbelievable Fact # 1: How Money is Created.

Money is created out of nothing.
Myth: it’s based on Gold: Not so! The Gold Standard was abandoned years ago.
-Well….it’s not quite created ‘out of nothing’: it’s created out of a faith based on the credit of a nation: otherwise, it would be worthless. If I give you a $20 bill, you believe (have faith) that you can use it as a medium of exchange to buy other goods or services. Moreover, there are two ways to create money (out of essentially nothing).

(1) GCM (Government Created Money) is created by the federal government. People understand this method. Most people when asked would say, “Well, the government creates money.” That’s true. But how MUCH of the money supply each year does the government create? About 5%. That’s all. So who creates the rest?

(2) BCM (Bank Created Money): the private banking system creates money. How does the private banking system “create” money? Simple! But unbelievable! Bear in mind that MONEY IS CREATED OUT OF NOTHING. So, when you make that $30,000 loan at your bank for a new truck, that amount is typed into you bankbook. Seconds earlier it didn’t exist! Now YOU owe that money TO the bank, + interest!
Myth: the money for your loan is somehow “backed” by deposits on-hand in the bank where the loan is made… Not so!

You, as a citizen or a business, don’t have a choice. Much though you might like to, you can’t create money. You have to borrow your money from the private banks.  These chartered banks continually create money out of nothing and subsequently make huge amounts of profit out of nothing.

GUESS WHICH CHOICE OUR GOVERNMENTS MAKE?
YOU GUESSED IT!  Some 95% of our money is created as BCM (Bank Created Money)
-UNBELIEVABLE!
You may say, “-So what? Some abstract argument about ‘how money is created’ doesn’t effect me, anyway…”
-Oh yes it does! You’d better believe it!

In conclusion, the Canadian Action Party has reviewed the historical record and has presented a case study above.  We agree that a prudently managed central Bank of Canada is essential for Canadians. An active Bank of Canada will reign in our federal debt.  Its regulatory abilities will mean less funds for multinational companies such as those who currently own our chartered banks.  A strong public central bank is a plus for Canada.  Canada will be able to focus her finances on infrastructure and business development that will benefit the larger part of Canadians who pay the larger part of taxes.

For a comprehensive review of the value of a country having a  strong central banking system, it is recommended that you read Ellen Brown, (2013) “From Austerity to Prosperity: The Public Bank Solution,” Third Millennium Press: Baton Rouge, Louisiana.  ISBN 978-0-9833308-6-8.